Below you can read about typical race day weather, China's climate, and see the average weather conditions in select Chinese cities - for example Beijing, Xi’an and Shanghai.

China's vast area is home to 1.3 billion people, which is one fifth of the entire earth's population! The vast majority live in the eastern half of China around major rivers such as the Yangtze and Huang He (Yellow River) and their fertile deltas. The area to the west is quite sparsely populated.

In a natural sense, China's landscape is divided by a vertical line almost right in the middle. The area to the west of this line is filled with high mountains and plateaus, while the landscape to the east flattens with few low ridges and large, low-lying plains. Farther to the northwest and towards the border with Mongolia, sandy masses spread in the Gobi and Taklamakan deserts.

The climate in China is characterized by the enormous size of the country. In the north, the climate is temperate with summer temperatures around 25 C and very cold winters. In the south, it is subtropical with very hot summers and mild winters. In the summer, monsoons blow huge rain showers in from the east, while in the winter, dry and cold winds come whispering from the northwest.

Expectations at The Great Wall Marathon 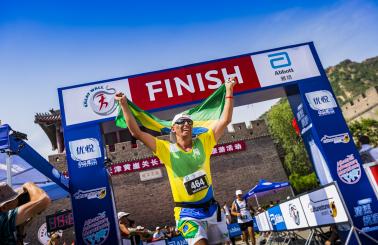 In May, spring is in its prime with sunny, blue skies and lush, green vegetation lining the Great Wall.

In recent years, the weather during The Great Wall Marathon has been somewhat unpredictable, varying from a low of 16°C/61°F to a high of 35°C/95°F.

On average, the temperature is around 25°C/77°F. Rain is unusual during the race, but can occur. Be prepared for high humidity.